Personal Days
Each employee will receive 104 personal days a year. They are called Saturday & Sunday.

Bereavement Leave
This is no excuse for missing work. There is nothing you can do for dead friends, relatives or co-workers. Every effort should be made to have non-employees attend to the arrangements. In rare cases where employee involvement is necessary, the funeral should be scheduled in the late afternoon. We will be glad to allow you to work through your lunch hour and subsequently leave one hour early.

Toilet Use
Entirely too much time is being spent in the toilet. There is now a strict three-minute time limit in the stalls. At the end of three minutes, an alarm will sound, the toilet paper roll will retract, the stall door will open, and a picture will be taken. After your second offense, your picture will be posted on the company bulletin board under the "Chronic Offenders category". Anyone caught smiling in the picture will be sanctioned under the company's mental health policy. 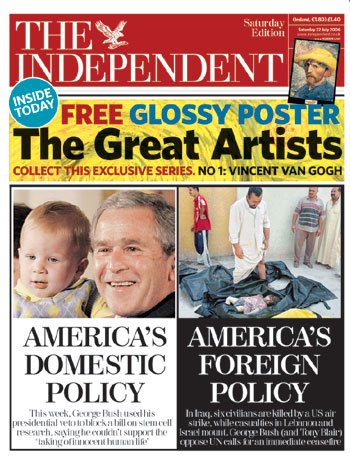 Do people know that he is the top comic in the country right now?

The title above links to the object and this is a link to the video.

the second one is only 30 seconds. the first one is called "from bush to hitler."