"Michael Moore is right. The republicans have lost their sense of humor. James Broadwater is a candidate for Congress in Mississipi's 2nd Congressional District. He claims he got duped , and he did, but were his views accurately presented, undoubtedly. James is rightly worried, the truth is a powerful weapon. This republican only wants the truth revealed if it's his 'truth'.He wants the anti-god media brought under strict FCC control. James is clinging tightly to his soul but his sense of humor has gone missing.

I received this today from a real special person. This is the second update they have sent me and they are a little apologetic for sending me this stuff. I am soooo happy to be receiving information like this from you :-)

~~ ~~ ~~ ~~ ~~ ~~ ~~ ~~ ~~ ~~ ~~
RuminateThis: Gubernetorial duties: "…my Governor, Ted Kulongoski of Oregon, has been in Boston as part of the state delegation to the Democratic Convention this week, but he’s leaving today to return home. Pressing state business, you say? Important political event or leaving on some overseas trade/travel junket, you might inquire? Needs to start his vacation and cut some brush around the ranch, you may snarkily query?

~~ ~~ ~~ ~~ ~~ ~~ ~~ ~~ ~~ ~~ ~~
the alternate patriot: "Ron Reagan, the younger son of the late President Reagan, criticized the Bush administration's foreign policy, saying he believed the president misled Americans to gain support for the Iraq war.

'We lied our way into the war,' he said on CNN's 'Larry King Live' on Wednesday, referring to allegations that Saddam Hussein had weapons of mass destruction and direct connections to al-Qaida. 'It's a terrible mistake, a terrible foreign policy error.'

~~ ~~ ~~ ~~ ~~ ~~ ~~ ~~ ~~ ~~ ~~
NathanNewman.org - News and Views: Labor Triumphant: "For decades, despite the ostensibly pro-labor tilt of the Democratic Party, unions have had to fight just to get pro-worker language onto the platform on such crucial issues as trade. Not this year. Thea Lee, the AFL-CIO’s chief policy and politics staffer on all things trade related, noted that Kerry’s platform watchdogs were happy to see that the platform includes the need for establishing workers’ rights and labor and environmental standards in trade accords...

Had a chance to do some actual organizing today for the first time in months. You forget how rewarding it is when you don't do it for awhile. I enjoyed being on the bargaining team during the contract campaign, but I'm glad to get back to the work that really builds the union."

"Crazee: Well if it isn't the S-Train!

Me: Ya know it man. How you been livin'?

Crazee: Been out of the joint for 8 years. Clean livin' with a good woman and a son. What about you?

Me: Been out for over 12 years. Got a wife and three kids. Hanging in there.

Crazee: That's good man. For what its worth, I'm sorry man. Sorry for all the shit back then.

Me: I hear ya. I'm sorry, too. Those were some fucked up times for both of us.

Me: Well Quincy, you take care now. Keep on keepin' on.

Crazee: You do the same Solomon.

Me: Here's my card, man. Call me sometime. To talk about things. Maybe we can hang one day.

"Neal Pollack convined people across the web to declare April 15th, “Fair and Balanced Day” to protest Fox News’ decision to sue Al Franken for using the words “fair and balanced” in the title of his book, and add the phrase “Fair and Balanced” to their web site, either in the title, or in a posting.

I’m hoping that I can convince at least a few people to do this same, in reaction to the latest news about the torture at Abu Ghraib (see below). I’ve already added “We Apologize for Abu Ghraib” to the title of my weblog."

~~ ~~ ~~ ~~ ~~ ~~ ~~ ~~ ~~ ~~ ~~
Blog Left: Critical Interventions Warblog : "Lynne Cheney told CNN that she agreed with her husband's initial position in the 2000 campaign -- as she put it, that 'people should be free to enter into their relationships that they choose' and 'that when it comes to conferring legal status on relationships, that is a matter left to the states.' 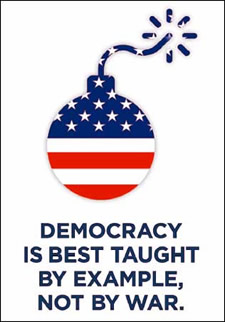 Ya know, I think this is a fine idea, to protest and report, basically keep an eye on the Sudan genocide.

jiveturky: The single greatest event of my life.: "His smile faded, and he raised his left arm in our direction. And then, George W. Bush, the 43rd president of the United States of America, extended his middle finger."

Those wacky Norwegians, they are protesting in a new way, with group, Fuck for Forest.

" "Sadly, No!" is all over the story of the abuse Iraqi children in our Iraqi prisons."

New Zealand has officially banned mercinaries. That means you can't go to Iraq and get paid $8-$10000 per week as a "contractor" while solidiers are getting less that $2000.

You can't do that and come back home to New Zealand without getting into a whole lot of trouble.

~~ ~~ ~~ ~~ ~~ ~~ ~~ ~~ ~~ ~~ ~~
Seeing The Forest: "Many observers of Southwest Airlines assume that our outstanding relationship with our People is due to a non-union work force. Nothing could be further from the truth. As a percentage of total Employees, Southwest is probably the most heavily unionized airline in America. More than 4 out of 5 Employees at Southwest are union members."

10. That actor who played the President was totally unconvincing
9. It oversimplified the way I stole the election
8. Too many of them fancy college-boy words
7. If Michael Moore had waited a few months, he could have included the part where I get him deported
6. Didn't have one of them hilarious monkeys who smoke cigarettes and gives people the finger
5. Of all Michael Moore's accusations, only 97% are true
4. Not sure - - I passed out after a piece of popcorn lodged in my windpipe
3. Where the hell was Spider-man?
2. Couldn't hear most of the movie over Cheney's foul mouth
and
1. I thought this was supposed to be about Dodgeball

Can you imagine walking into a carwash and telling the manager that you want a car wash, but you don't want to pay for it? Everyone else is getting their cars washed there, so why shouldn't you? You just don't want to pay. Well, obviously you have to pay to get your own car washed, but you certainly shouldn't be forced to pay for someone else to get his car washed, should you? Of course not.

You could do that out of the kindness of your heart, but imagine being imprisoned for refusing to pay for another man's car to be washed! That is, of course, insane. Well then, why should I be forced to pay for bombs and armies and a broken 'social security' system if I don't want to take part in it? The answer is simple - I shouldn't. '

Sometimes you're surfing along the internet just reading people's thoughts in a relaxing manner. Then it hits you. In spite of whatever you might see in the daily news, maybe that bright future we've all been expecting really isn't as far away as we all thought.

~~ ~~ ~~ ~~ ~~ ~~ ~~ ~~ ~~ ~~ ~~
Dirty Greek: "A team of US military officers acted as censors over all coverage of the hearings of Saddam Hussein and his henchmen on Thursday, destroying videotape of Saddam in chains and deleting the entire recorded legal submissions of 11 senior members of his former regime.

This is not surprising, after Bush said (as he left Ireland) 'Nato has the capability and... the responsibility to help the Iraqi people defeat the terrorist threat.'

The responsibility?! Come on, Shrub! You broke it, you bought it.

Alright, GeeDubya, where's the cash you stole from Iraqi people?

~~ ~~ ~~ ~~ ~~ ~~ ~~ ~~ ~~ ~~ ~~
Dirty Greek /journal.php: "The Defense Department will allow families of U.S. troops and others killed in Iraq to watch their loved ones' coffins be removed from military transport planes at Dover Air Force Base in Delaware, according to a memo issued last month."

This was suggested in Atrios' comments section and is going around:
Send your Fahrenheit 9/11 ticket stubs to: