Apparently you only need one or the other, blood or body, wine or wheat, to fullfil the religious aspects of this ritual. So apparently little Haley needed only to drink wine, aka blood of Christ, for communion.

Why do neither of these journalist sources ask the question why that wasn't a resolution to the situation?

" Crash the Republican parties in YOUR neighborhood


Don't forget to bring lots of alcohol and a little bit of coke!" 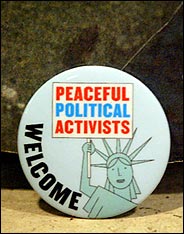 "In the Camino browser, text cannot be entered into the posting field. We will be making some changes to handle this browser better."

"...here’s what Dave Matthews had to say: