"Danica Patrick, a 23-year-old rookie who does not drive like one, rocketed into the lead with 10 laps left Sunday in the 89th Indianapolis 500, chasing away earlier misfortune and storming toward a first with each left-hand turn." 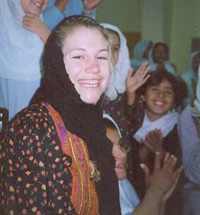 "When BlogPAC began talking about engaging in the battle to save Social Security, we were nervous. Blogs had proven themselves in the elections, but hadn't focused that much on policy, so we were wondering if anyone would care. Also, when we began last December it seemed certain that this was a fight that Democrats would lose.

But we all cared deeply about Social Security, so we decided to fight anyway.

Privatization is DEAD. Bush lost. The Democrats united and won.

"On this Memorial Day, I hope that people will remember that they DID die in vain--the troops who died in Vietnam and Granada and Panama and Somalia and Iraq and Afghanistan and Haiti. They died because their 'leaders' lied. Paradoxically, if people would remember that they died in vain, it would be the only way to make it so they didn't. But if we continue to support the lie that they died to protect our country or 'freedom,' we guarantee that many, many more will die in vain.

"Then you should enjoy (or have nightmares about) this...

A satirical article entitled 'Bush: 'Our Long National Nightmare Of Peace And Prosperity Is Finally Over'' was posted in The Onion on January 17, 2001.

"'To President George W. Bush on Iraq, Iran, and North Korea: ''The United States, as the world knows, will never start a war. This generation of Americans has had enough -- more than enough -- of war.' (American University commencement, 1963)

"The House of Representatives voted down a measure, by a 128 to 300 vote, that called on President Bush to devise a plan for a withdrawal from Iraq. It came in the form of an amendment to the $491 billion budget for the Pentagon that was passed on Wednesday night.

Tom Delay is smoking a Cuban cigar in Jeresulum while he was there to meet with Jewish Republicans.

"Have I suddenly woken up in 1947? Are these people even aware of how stupid they are?

As I take this walk towards my death I do it with a good friend of mine, Bryan Wolfe, who has a date for May 18th, the day before my own date. We are neighbors now and we have had some pretty wild and crazy talks about what is going down, but most on our minds is the pain and suffering our families are going through. And here I thought we were all cold blooded and heartless killers, eh? HA!HAH!HA!

SUPPORTERS RALLY TO DEFEND PASTOR WHO FIGHTS FOR THE POOR

by Rich Capalbo and Sandra Reid

On May 21, 2005, community leaders, activists and students from Michigan and the Midwest met in Benton Harbor, Michigan, to rally in support of Rev. Edward Pinkney. The reverend faces serious vote fraud charges, trumped up by the local government to silence him. He is a key leader in the fight for justice in Benton Harbor, a city ravaged by unemployment, criminalization of youth, and the polarization of wealth and poverty. The community has a leadership group, headed by Rev. Pinkney, that understands what is going on, and has mobilized the community to take action, drawing fire from the local establishment and corporate interests who plan to take over the city. Rev. Pinkney told the People's Tribune the rally was a success. "We wanted a show of force. The community is now aware. People have been afraid. The sheriff has been breaking into their homes at three in the morning. Now they see there is outside help."

Following are some of the words of support expressed at the rally:

"As an individual we can do nothing. We have to learn this. If we stand up, we can win this battle. It's not just about Benton Harbor. The whole state belongs to us. We are a people." -- Rev. Edward Pinkney, Black Autonomy Network Community Organization (BANCO)

"I'm proud to be here. When you hear ministers who not only quote the gospel, but live the gospel, who are standing here and who are not afraid ... when we get rid of all of these judges and prosecutors, police officers who kill, when we deal with them, we'll be running America." -- Ron Scott, Detroit Coalition against Police Brutality

"We're fighting the privatization of the water in Detroit. Education, healthcare, utilities, should be nationalized and run in the interests of the people. This is what the fight in Benton Harbor is about. They don't need us to work any more, so they don't think we need benefits. All of the wealth goes to the Empire. They're starving the cities. We can't let them get away with the attack on Rev. Pinkney." -- Marian Kramer, Michigan Welfare Rights Union

"We are mandated by the Constitution to alter our government when our safety and pursuit of happiness are in danger. We must continue to challenge and alter this oppressive government together for the protection of all." -- Libby Hunter, media spokesperson, BANCO

"We have to unite our forces to be successful. What transpired during the civil disturbance here broadened my view. I see Benton Harbor as the catalyst for change not just throughout the state of Michigan, but throughout the entire world." -- Calvin Hunter, candidate for city commissioner in Benton Harbor

"I want to say a word to this ruling clique that governs this area: Don't underestimate us. Don't think that we don't know whose sweat and toil built these mansions. Don't think that we don't understand that you are rich because we are poor. You will not break our movement by attacking our leaders. Any movement that doesn't defend its leaders is not worth its salt. My advice to this clique is: back off while there's still time."-- Nelson Peery, author, "Black Fire: the Making of an American Revolutionary"

WHAT YOU CAN DO:

Funds for legal expenses are urgently needed. T-shirts are a $20 donation. Make donations payable to BANCO. Send to 1940 Union Street, Benton Harbor, MI 49022. The next demonstration is June 25 at 11 a.m. at the Benton Harbor Public Library, 213 East Wall Street. Jimmy Carter will be in town.Call 269-925-0001 for more information.
FROM THE PEOPLE'S TRIBUNE

Benton Harbor is a burning example of the struggles evolving across the country. Driven out of industry, growing millions have no choice but to fight for a decent future. We are met with police repression and the jailing of our leaders. We will defend our leaders while we stay on the offensive in the streets. We are stronger than the opposition, but they are united and our forces are scattered. As we carry on the fight we must unite our forces locally, statewide, and finally across the country. We must go to our communities and family by family show them this is their struggle and they must make their will felt. There are only two paths: submit and sink lower and lower, or resist the oppression, reclaim our country and create a decent future for ourselves. In Benton Harbor, the battle is joined and victory belongs to the people.

"Karen Pickett has organized a gathering at the scene of the 1990 car bombing on Park Blvd. at the intersection of East 33rd St., across the street from Oakland High School, a couple blocks from where I. 580 crosses Park. ... May 24th has been officially declared Judi Bari Day in Oakland, California since 2003, but has been observed by us since 1991."

"“Backpack and Ta-da are beautifully simple, elegant and intuitive tools that make an Outlook screen look like the software equivalent of a torture chamber.” -Jeremy Wagstaff, The Wall Street Journal"

"The ACLU has launched a nationwide effort to expose and prevent FBI spying on people and groups simply for speaking out or practicing their faith. As a first step, the ACLU and its affiliates have filed Freedom of Information Act requests in more than a dozen states. Although the FBI has refused to turn over most of the files, we have obtained evidence (pdf) that confirms the FBI and local police, working through Joint Terrorism Task Forces, are spying on political, environmental, anti-war and faith-based groups. We think the public deserves to know who is being investigated and why. We have sued (pdf) the FBI and the Department of Justice to get those answers.

"It took Therese Mwandeko a year to save the money. She knew she could walk the first 40 kilometers of her journey, but would need to pay for a lift for the last 20.

My church is collecting small toys (such as the toys you get at McDonalds and etc.). Our mission group is planning a trip in December and they always try to take small toys to the children .

These children are thrilled with these toys, where as our kids let them fall to the bottom of the toy box or throw them away. If you would like to donate any please send them in a Wal-Mart bag or what ever and I will take them to the group.