A pod cast mp3. I still don't groke what a podcast is, but mp3 technology I understand.

"We again marched to the barricades. This time the group was even less organized but after a concentrated effort and a count of three we rushed the barricades and succeeded in bringing part of it down. There was a very rapid retreat after the pepper spray made another appearance but according to the Washington Post, the presidential motorcade was momentarily paused because of the incident. I guess this was a small victory."

"BOSTON— A Boston parking meter attendant suffered first-and second-degree burns on her face and upper torso after a man angry over the $55 ticket she gave him allegedly threw hot coffee at her.

Stewart, a New Yorker who has resided in Salt Lake City for the past five years, will recover damages from the films, The Matrix I, II and III, as well as The Terminator and its sequels. She will soon receive one of the biggest payoffs in the history of Hollywood, as the gross receipts of both films and their sequels total over 2.5 billion dollars. "

The Next Tea Party: Another attack on Iraqi freedom

"Now, Iraqi farmers are not allowed to plant seeds they save from each harvest, as it violates newly inforced international plant patent laws. So its not just about the oil afterall.
From From Vegsource" 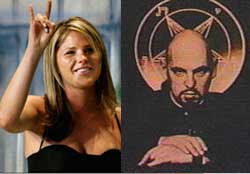 Boing Boing: Why is the president's daughter throwing signs?

"Why is the president's daughter throwing signs? Is it me, or is Jenna Bush holding up the sign of Satan next to her father's face in this photo? Choose picture #7 in this MSNBC slide show. Are there other common meanings for this hand-sign, other than, say, 'four more beers'? "

"Have you seen The Take, Naomi Klein and Avi Lewis's documentary about Argentine workers' struggles to take control of the empty factories they used to work in?

The official result shows 621,403 of the all-male electorate supported the vote for women and 323,596 were against."

I've been following the news from Benton Harbor, and this is the worst I've heard in some time. First, excerpts from a Jan. 16 message charging sexual harassment and brutality by police. Then below, Gov. Granholm awards Benton Harbor police chief Sam Harris with an MLK award. If you haven't been following the complex situation in BH, you might think this is all exaggeration and angry conjecture. Whether you agree with Rev. Pinkney's analysis or not, Sam Harris receiving an MLK award, at the same time his department is being charged with brutality and harassment, is gross and cynical politics played at the expense of Benton Harbor residents. Make your opinion known to Gov. Granholm and spread the word.....Thanks, Jackie

During an emotionally charged Community Forum in Benton Harbor on Saturday January 15 it was reported that African-American victims of recent racial profiling were ordered to PULL THEIR PANTS DOWN IN THE PRESENCE OF POLICE
DOGS. In the past week I have heard the same report from three different people: the driver is ordered out of the vehicle by Benton Harbor police and dogs are released from the police cars. The men are told to pull their pants down or the dogs will "bite off their balls." Women are told to drop their pants or go to jail.

Over 50 "Driving-While-Black" complaints, many involving police brutality/sexual harrassment, have been documented at BH City Hall in the LAST WEEK ALONE.

A young man reported to me two days ago that a "white cop snatched my food and put his hands in my pocket. He grabbed my arm and twisted and bent it, trying to break it. He slammed my head against the car over and over, and kicked me between my legs over and over." A second cop stood by and kept saying that he had the wrong man, but the cop continued to beat him mercilessly.

At the Community Forum on Saturday a woman addressed the group saying, "The police are on an illegal hunt and it is a conspiracy." Her son graduated from college last spring, and is now taking classes and running his own business. His car is paid for. He was stopped by cops twice in one week and believes they were trying to provoke him. They used swear words and made accusations.

Sam Harris, the Benton Harbor Police Chief who has broken MANY Benton Harbor rules and regulations, was on TV news recently saying, "You can't get rid of me." He also said City Commissioners mean nothing to him.

It is no exaggeration to say that we are living under the shadow of death in Benton Harbor. We are in the MOST desperate need possible for MANY people to contact Gov. Granholm. Express your outrage at what you read below.

Yesterday at a holiday celebration at Lake Michigan College Gov. Granholm gave the MLK award to Benton Harbor police chief Sam Harris who has broken more BH rules and regs. than anyone, and has presided over extreme police brutality and sexual harrassment. At the event, with a crowd of over 400 (95% white Republicans), Granhom said that PEOPLE WILL ALWAYS COMPLAIN, and that Harris SHOULD IGNORE THE OVER 50 COMPLAINTS filed in recent days against the BH police department. Yes, this is really what she said.

The people from Benton Harbor fled from the cowardly enemy of the south only to seek refuge in the same cowardly enemies in the north. They go into policing so that they can beat and kill us. They seek to kill us or get us killed at any price and do not care about our loyalty to them.

It is obvious that Gov. Granholm has defaulted on this promisory note in as far as her citizens of color are concerned. Instead of honoring this scared obligation, Gov. Granholm has given the black people of Benton Harbor a bad check which has come back marked insufficient funds. The city is outraged. There have been more than 50 complaints in recent days about police chief Harris and the BHPD which has 27 officers, 20 of whom are white. Sam Harris is no MLK - maybe Luther, but no MLK. Today more than 100 registered voters called me about Granholm saying they will never vote for her again. I, Rev. Edward Pinkney, will never vote for her again. The governor's task force which was put together after the 2003 uprising in BH was a joke. The city of BH is in worse shape today than before the uprising. Residents of BH are growing weary of the gov. as police brutality and sexual harrassment continue to grow out of control. We have proof here in BH that a corrupt police chief produces corrupt officers. No citizen who stands on the principal of justice will vote for Granholm in 2006.

not directly linking to the source of the image: http://dontblamemeivoted4kerry.com/, because I am not so sure about them, I like the image though!

""Some of the things he said sounded extremely sympathetic to the detainees," said Army Reserve Capt. Jason Orlich, a newly arrived intelligence officer. "I mean, it made the hair on the back of your neck stand up at attention."

"Featuring an exhaustive collection of over a thousand photographs, Josh MacPhee's unique survey brings together the complex history of the street stencil with the boldest and most beautiful paint work from around the world. From three-color anti-capitalist symbolism in Australia to fly-by-night hip hop tags in Ohio, from portraiture in Paris to feminist declarations of self-defense in San Francisco, from environmentalist wheat pasting in Texas to radical circus promotion in Chile, the enormous scope of this often anonymous art form is celebrated and brought into critical focus." ~ ~ ~ ~ ~ ~ ~ ~ ~ ~ ~ ~ ~ ~ ~ ~ ~ ~ ~ ~ ~
~ link: Monday, January 17, 2005
~ make: del.icio.us
~ say:
~ ~ ~ ~ ~ ~ ~ ~ ~ ~ ~ ~ ~ ~ ~ ~ ~ ~ ~ ~ ~

A friend of mine watched the tsunami come in and the destruction it brought. WMA audio link 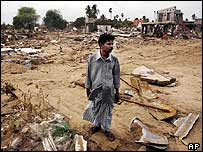 "Arjuna Seneviratna, a 40-year-old IT consultant from Sri Lanka, lives in the capital Colombo but was staying in Beruwela on the south-western coast when the tsunami wave struck.

It doesn't really matter that everyone will be out spending what they
didn't the next day -- a point or two will have been made: Since our
religious leaders will not speak out against the war in Iraq, since our
political leaders don't have the moral courage to oppose it, Inauguration Day, Thursday, January 20th, 2005 is "Not One Damn Dime Day" in America.

On "Not One Damn Dime Day," please boycott Walmart, KMart and Target. Please don't go to the mall or the local convenience store. Please don't buy any fast food (or any groceries at all for that matter). For 24 hours, please do what you can to shut the retail economy down. The object is simple. Remind the people in power that the war in Iraq is
immoral and illegal; that they are responsible for starting it and that
it is their responsibility to stop it.

"Not One Damn Dime Day" is to remind them, too, that they work for
the people of the United States of America, not for the international
corporations and K Street lobbyists who represent the corporations and
funnel cash into American politics.

Not One Damn Dime Day" is about supporting the troops. The politicians put the troops in harm's way. Now 1,200+ brave young Americans and (some estimated) 100,000 Iraqis have died. The politicians owe our troops a plan -- a way to come home.

There's no rally to attend. No marching to do. No left or right wing
agenda to rant about. On "Not One Damn Dime Day" you take action by doing nothing. You open your mouth by keeping your wallet closed. For 24 hours, nothing gets spent, not one damn dime, to remind our
religious leaders and our politicians of their moral responsibility to
end the war in Iraq and give America back to the people.

" A link to a Rall blog entry talking about his web challenge to Ann Coulter...