~~ ~~ ~~ ~~ ~~ ~~ ~~ ~~ ~~ ~~ ~~
The Northwest Airlines Mechanics strike - a tsunami of harsh words, misleading newspaper coverage (SHOCKING!) and arguments. In the center, a group of workers on the line. Friends of Labor have stepped forward again. We have an opportunity to hear the workers side and give them a financial hand.

"I love the CBC. We all do. That's why this is so upsetting. Most people that work there are so proud to be a part of the corp, that they will PAY for a hat or a t-shirt with the CBC logo on it. They wear it with pride.

How many companies can boast that?

"Independent truckers in the intermodal rail yards of Stockton, California won the majority of their demands in a two-day strike September 13 and 14, 2004 against the Patriot Trucking Company.

I urge folks to go out and support Camp Casey in Detroit. I was there for several hours today and folks are intent on making this work. They need 24 hour coverage - even if you can only stop by for a few minutes, that is helpful. Supplies like food and water are also helpful.

Describing the atmosphere at Camp Casey One & Two in
Crawford, Texas, as "electric", the delegation from Detroit
which traveled to the historic peace gathering outside the
vacation ranch of President Bush, will return to the city
today.

The delegation has declared the formation of "Camp Casey
Detroit" to further the cause of the Gold Star Families for
Peace and the anti-war movement as a whole to "Bring the
Troops Home Now!". "Camp Casey, Detroit" will be set up at
Grand Circus Park in downtown Detroit on the corner of
Woodward avenue and Adams today, Monday, after 1:00 p.m.

"We are calling upon military families, peace activists,
youth, clergy, people of faith, labor, educators and all
others who wish to see an end to the war policies of the Bush
administration, to join us at 'Camp Casey Detroit'," the
Detroit delegation said in a statement.

This ongoing project will continue at least until the massive
anti-war demonstration in Washington, D.C., which will be
held on September 24. The Michigan Emergency Committee
Against War & Injustice, "MECAWI":http://www.mecawi.org/, is organizing buses to
travel to the nation's capital for this important gathering
to demand that the Iraq occupation be stopped immediately.

Also on Wednesday, August 24 at 7:00 p.m., the weekly meeting
of "MECAWI":http://www.mecawi.org/ will feature a "report back" from the delegation
that traveled to Camp Casey in Crawford. Members of the
delegation met other anti-war activists from around the
country. One delegation member, a military mother whose
daughter served in Iraq for one year, addressed the mass
rally at Camp Casey II near the Bush vacation ranch on
Saturday evening.

The Detroit delegation were so inspired by the outpouring of
anti-war sentiment at Camp Casey in Crawford, they have
choosen to set up "Camp Casey Detroit". This is a nationwide
movement with the establishment of other "Camp Casey"
actions in San Francisco, California as well as a growing
number of cities around the country.

Please come to Grand Circus Park to join in support of this historic
movement toward ending the debacle of the ill-fated war in Iraq,
and help BRING THE TROOPS HOME NOW!

Digital Libraries a la Carte, Choices for the Future 2005 : Abstracts

The following lectures will be presented:

For progressives today, times are clearly not easy. However, as Gar Alperovitz demonstrates in his new work, AMERICA BEYOND CAPITALISM: Reclaiming our Wealth, Our Liberty, and Our Democracy (John Wiley & Sons, $24.95), AmericaBeyondCapitalism.com, just below the surface of public attention, present-day difficulties are also causing a steady build-up of system-changing developments which offer hope for the future, including the development of thousands of worker-owned firms-11,000 to date- neighborhood corporations, municipal enterprises, state investment strategies, public pension funds, and other innovations that are transferring wealth to the vast majority rather than the 1% at the top

"Wikipedia, with more than 1 million entries in at least 10 languages, is the mother of all wikis, but there are also wikis devoted to quotations, the city of Seattle, and Irish politics. (Check out this wiki of wikis, which lists more than 1,000 sites.) Instead of enforcing rules, wikis trust that groups can behave. Anyone can edit or reorganize their contents. If you realize something's missing, incomplete, or incorrect, you can fix it yourself without asking permission. 'People told me that the experience changed their lives,' Cunningham said via e-mail."

I just signed up to file a Freedom of Information Act Request to force the adminstration to release the records of Supreme Court nominee John Roberts.

Roberts worked for the Justice Department on 16 key Supreme Court cases -- the records will give the best perspective of his view on crucial issues.

What are they hiding? Let's find out -- join me and file a Freedom of Information Act request:

Wednesday, 17 Aug 2005, 7:30 PM
We Support Cindy Sheehan Vigil is an opportunity to stand up and support those military fighting and their family members who do not believe in Bush and this terrible war.

Message from host: Please come and stand quietly with me, a mother of a soldier in Iraq, for this solemn candlelight event in Detroit to support Cindy Sheehan in Texas. Please bring candles and placards printed from the MoveOn.org website. Standing up against Bush is not being against the military who are fighting for what they believe. Please don't bring pets. The downtown Detroit area is not a great place for animals.

Check here for more details or other locations of vigils in your areas:
Plus you can rsvp on the site to let others know how many will attend. It could help snowball the gathering.

"The Pentagon will hold a massive march and country music concert to mark the fourth anniversary of 9/11, Defense Secretary Donald Rumsfeld said in an unusual announcement tucked into an Iraq war briefing yesterday.

So, his last chance for a fair trial is at 9am on Tuesday Sept. 6 when his atty. will ask the Berrien County Courthouse to disqualify all Berrien County prosecutors from his trial. They have already denied
him the disqualification of Berrien County judges.

If this is denied, Rev. Pinkney is a big step closer to spending 20 years in prison. He has endured a smear campaign by the Herald Palladium and other area media, and now is forced to spend his time and money to defend his actions: standing up for the people of Benton Harbor.

As one middle aged woman said at the last rally, "We can't allow them to lay their hands on Rev. Pinkney. He's the only person in my lifetime who has stood up for the people of Benton Harbor against racial profiling and police brutality."

We need to pack the courtroom to show that Michigan citizens of conscience will come out to look corruption and injustcie in the face, and show the most terrorized community in the state (that we've been hearing about for decades) that we are watching and supporting one of their advocates.

1. Emergency Demonstration to support Cindy Sheehan – Monday, August 15 from 4-5:30 PM at McNamara Federal Building in Detroit. Cindy Sheehan, whose son Casey was killed in the Iraq War, is camped outside Pres. Bush’s Crawford Texas ranch. More and more anti-war activists are joining her daily as she speaks out against the war in Iraq and the occupation of Palestine. Bush was forced to acknowledge the depth of anti-war sentiment in the country at a press conference. Most of us can’t go to Crawford, but we can show our support.

If you aren’t in the Detroit area, call an action at your local Federal Building. Everyone can call, fax, and email the White House and ask the staff there to contact the President on his ranch and ask him to meet with Cindy Sheehan.

MECAWI calls on all anti-war activists in the metro area to line both sides of Woodward Avenue starting at 10:00 AM at Grand Circus Park (cross street - Adams).

The AFL-CIO national convention went on record for a “rapid withdrawal of troops from Iraq.”

Let’s expand the message to “Money for Detroit, Not for War” and “Bring the Troops Home NOW!”

Bring your signs and banners. The whole parade will have to march past and we will have a sound system and literature.

"At least one person read last week's roundup, so I figured I'd better do it again.

Let me start with a little bit of housekeeping. There have been several sites added to our labor blog aggregator this week. First and foremost are the Industrial Workers of the World. Wobbly blogger intexile has a few things to say about The Capitalist Pyramid Scheme. Also worth checking out is intexile's analysis of the AFL-CIO split.

IFILM - Shorts: Why I Love Shoplifting from Big Corporations

"I am writing you with much concern after having read of your hearing to decide whether the alternative theory of Intelligent Design should be taught along with the theory of Evolution. I think we can all agree that it is important for students to hear multiple viewpoints so they can choose for themselves the theory that makes the most sense to them. I am concerned, however, that students will only hear one theory of Intelligent Design.

"In February 1971, one month after the revelations of the My Lai massacre, a public inquiry into war crimes committed by American forces in Vietnam was held at a Howard Johnson motel in Detroit. Vietnam Veterans Against the War organized this event called the Winter Sodier Investigation with support from Jane Fonda and Mark Lane. More than 125 veterans spoke of atrocities they had witnessed and committed. 'The major that I worked for had a fantastic capability of staking prisoners,� goes one piece of testimony, �utilizing a knife that was extremely sharp, and sort of fileting them like a fish. . . . Prisoners treated this way were executed at the end because there was no way that we could take them into any medical aide and say, 'This dude fell down some steps.'' " ~ ~ ~ ~ ~ ~ ~ ~ ~ ~ ~ ~ ~ ~ ~ ~ ~ ~ ~ ~ ~
~ link: Wednesday, August 10, 2005
~ make: del.icio.us
~ say:
~ ~ ~ ~ ~ ~ ~ ~ ~ ~ ~ ~ ~ ~ ~ ~ ~ ~ ~ ~ ~

"Secretive 'guerrilla' artist Banksy has decorated Israel's controversial West Bank barrier with satirical images of life on the other side." 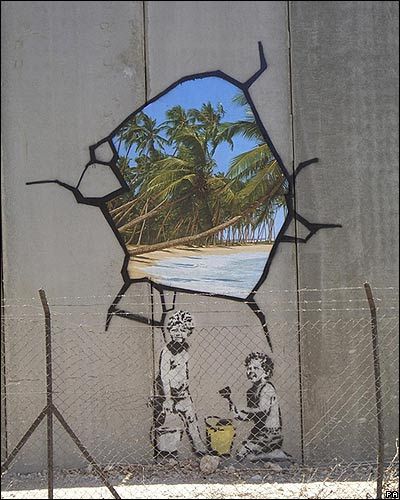 "Cindy Sheehan has a bone to pick with President Bush. She’s stationed herself along a Texas highway three miles from Bush’s Crawford ranch, vowing to stay the month in hopes of meeting with him.

"Wal-Mart is a company that wraps itself in red, white and blue.

I might understand it if Wal-Mart said I ought to fire Mark because what he said wasn't accurate. But that isn't the case. Mark accurately reported that there are 10,000 children of Wal-Mart employees in a health-care program that is costing Georgia taxpayers nearly $10 million a year.

"Wired has an article by Mark Baard on microchipped license plates. These are active RFID, which is basically a transponder. The article mentions the benefits of being able to catch anyone who is uninsured or has not renewed their license plate.

But it can also be used to track if you are speeding, if you drive on the wrong side of the road, cross a double yellow line, park in a handicapped stall.....

Q: What did the last man on Earth say when he walked into a bar?

"The Whispering Campaign gives you tools to help educate your friends and neighbors, without drawing too much attention to yourself.