It achieved fractional victory, at best, and that is not a castigation of the men and women involved in it; it’s an indictment of America and whiteness and a recognition of just how entrenched bigotry–and particularly anti-blackness–is in both things."

This powerful speech by Reverend Graylan Hagler is undoubtedly the best speech of the 21st Century.

In just over 4 minutes, Reverend Hagler covers the major problems of America in the world and the major solution--grass-roots efforts by people like you. You WILL believe you CAN make a difference after watching this speech.

Many thanks to all of those who have given us suggestions on how to proceed with the IBM Italy workers’ struggle that had remained unsolved after our historical Protest in Second Life on September 27th. By the time we went through all of the excellent and original ideas you gave us, some developments had taken place….indeed there are some very positive news we had to share with you:

1. Mr Andrea Pontremoli, IBM Italy’s CEO (who personally received all of your petitions by email) has resigned.

It seems our Virtual action had an impact on his role at IBM. IBM Corporation made a complaint to IBM Italy for the way they’ve managed the negotiations with the thousands of employees and how they’ve let it lead to such a harmful image for the company.

2. IBM Italy management have accepted to return to the negotiations’ table and has already met with the Works Council. We expect an agreement will -finally- be signed in the next week or two. IBM workers have now been waiting an entire year for the situation to unblock, so this is really fantastic news.

We would like to think that all of this has a lot to do with the incredible support all of you have given them over the last 6 weeks. Your involvement with the protest in Second Life, your news coverage of the events and your ideas to pursue fighting in “first” and “second life” have really helped tremendously.

You will never be thanked enough.

Again, we’ll keep you informed of the signing of the new agreement for IBM Italy workers!

Gobby is a free collaborative editor supporting multiple documents in one session and a multi-user chat. It runs on Microsoft Windows, Mac OS X, Linux and other Unix-like platforms.

Except the Mac OS X install is miserable and not me friendly. 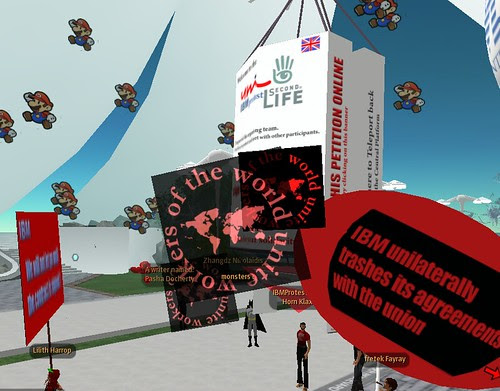 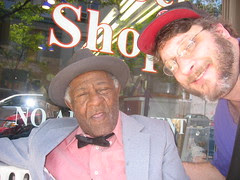 "It's not exactly a stretch to say the White House has public relations issues. For the most part, though, footage that could be held against them has been dug up by the Daily Show more than the mainstream media. And then came YouTube."

This documentary tells the real-life story of the legendary Flint-born poet-provocateur and cultural activist whose exploits have reverberated through the international underground for 40 years.

The film features commentary from Sinclair, his family, friends and associates through the years, as well as a series of electrifying poetry performances by Sinclair's contemporary blues and jazz ensembles.

The event will take place on John's 66th birthday, October 2nd, in his hometown at the beautiful Flint Institute of Arts followed by an after party at Churcill's Food & Spirits. Doors open at 5pm for a meet and greet with Sinclair and director Steve Gephardt. The film will start at 7pm followed by a question and answer session. Sinclair and Michigan jam partners Glowb will cap the night off with a performance at downtown hotspot, Churchill's Food & Spirits starting at 10pm.

In fighting that cultural abyss of hegemonic female disempowerment that only callousness would think could be ameliorated in two generations (I mean, think about that--my grandfather was born before all women could vote), I knew that I would try not to follow social norms without question and rock them back a little bit if I could.

(Or, 25 Examples of the Racism We Witness on a Regular Basis)

Fight Racism - I had a conversation with a friend the other day about racism (big surprise there!), and we began to get into inadvertent or ingrained racism. That is, the acts of racism that people commit without realizing that they are doing so. It was my contention that most everyone is guilty at different times of some sort of prejudice whether it be on purpose or not. He insisted that this wasn’t so, that he doesn’t have a racist bone in his body...

Unless it was intentional, which it may have been, the title should be the number one way to alienate people of color, defining people as non-white. I expected to see the post say something about it, because it was used all over the place and looks intentional. But no.

She signed an affadavit saying as much which
the second witness gave to his attorney.
His attorney contacted Rev. Pinkney's attorney
yesterday.

4.
Don't forget to come to the Mass Demonstration in Benton Harbor
this Monday, May 14, 12noon.

Begins at Colfax and Main St. (Work First Bldg. on corner)
March over bridge into St. Joseph and the Berrien County Courthouse

Rev. Pinkney and others will speak before his sentencing at 1:30pm

Let your voice be heard in support of Benton Harbor citizens by boycotting Berrien County Tourism. The 530 acre Harbor Shores development project is a collaborative venture between Benton Harbor, St.Joseph, Whirlpool Corp., the Alliance for World-Class-Communities, and Cornerstone Alliance. They are all the same people. The land for this venture was transferred to Benton Township and will belong to St. Joseph after Benton Harbor is bled dry paying for the infrastructure.